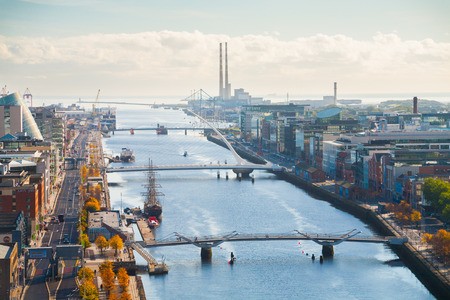 Every Irish folk song offers its own very unique and interesting history, especially “Molly Malone,” the famous song known as Dublin’s unofficial anthem. Irish Tenor singer Michael Daly lends his voice to “Molly Malone” as one of the 17 songs in his popular album Ireland From Glen to Glen.

Perhaps no Irish song has become the subject of as much speculation, gossip, and excitement as “Molly Malone.” The exact history and origins of the song are not precisely known, though its first publication is attributed to James Yorkston in the United States in 1883. Very little is known about Yorkston himself, but plenty of research has been done over the last 230 years regarding sweet Molly Malone, the main character of the song.

Back in 19th century Ireland, “Molly” was a very common nickname for girls named Mary or Margaret. According to the song, “In Dublin’s fair city, / where the girls are so pretty, / I first set my eyes on sweet Molly Malone, / As she wheeled her wheelbarrow, / Through streets broad and narrow, / Crying, ‘Cockles and mussels, alive alive oh!’” Based on these lyrics, Molly Malone was a fishmonger from 17th century Dublin who wheeled her barrow through the streets to sell her products. However, Molly meets a sad fate: “She died of a fever / And no one could save her, / And that was the end of sweet Molly Malone.” The song goes on to state that Molly’s ghost now haunts the streets, still crying, “Cockles and mussels, alive, alive oh!”

This sad yet catchy song points to a truth about 17th century Ireland, when fishmongers like Molly would secure their bounty at the city’s quayside each morning and then walk specific routes with their unique shouts in order to attract their customers. Of course, medicine and sanitation were very undeveloped at the time, so it wasn’t uncommon for the Irish to meet their deaths from fever. Historians are still unsure as to whether the Molly Malone portrayed in the song “Molly Malone” really existed, though records seem to have uncovered that a young girl named Molly Malone died in Dublin on June 13, 1699, leading June 13 to declared as Molly Malone Day in Ireland.

Michael Daly offers his own authentic version of “Molly Malone” on his Ireland From Glen to Glen album. You can listen to his warm Irish Tenor voice sing this Irish anthem by purchasing the song on his website, www.michaeldalytenor.com.